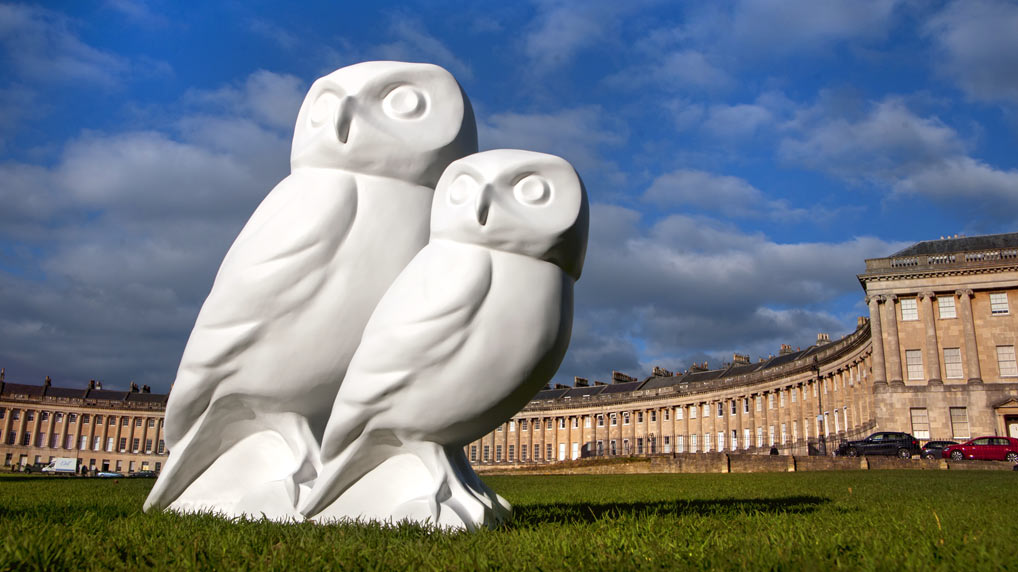 The super-sized Minerva’s owl sculptures swooping into the City of Bath this summer are inspired by the Roman Goddess Minerva, to whom the Roman Baths Temple was dedicated in the 1st century AD, and whose animal symbol was the owl of wisdom. Statues of Minerva usually feature her owl and one can be seen carved into the stone pediment of the Roman Baths temple, which is on display at the Roman Baths Museum.

Alan Dun, whose masterful hand also created the King Bladud’s Pigs and Lions of Bath sculptures, was invited again to create the Minerva’s owl sculpture, based on the Little Owl species, with a hint of Roman and Greek characterisation.

Alan’s owl was hatched in his studio in Limpley Stoke near Bath where several incarnations were created using small scale clay models, known as maquettes. Once the design was finalised, the maquette was 3D-scanned by a team from the University of Bath and then upsized by Fineline, a Bristol-based feature film prop company, whose multi-million pound CNC milling machine automatically created the large 1.1m master owl and 75cm owlet prototypes. These were then sent to the Country Leisure fibreglass factory near Andover where the ‘parliament’, as a group of owls is known, is hatching.

Alan Dun, sculptor says: ‘It’s great to be involved in Minerva’s Owls and to have now completed a hat-trick of sculptures for Bath’s wonderful public art trails. The Little Owl has been a pleasure to sculpt; they are such characterful birds and their strong association with Roman Bath made for a fascinating challenge. I’m delighted that once again, local charities will benefit from the sculptures, particularly the UK Little Owl Project which is committed to conserving these fabulous creatures, and the cancer unit at the RUH’.

The Little Owl is one of the smallest and most charismatic of the owl species. It was introduced to Britain from Europe in the 1880’s to help control garden pests and can be found living in tree hollows, farm buildings and nest boxes around Bath and the surrounding region.